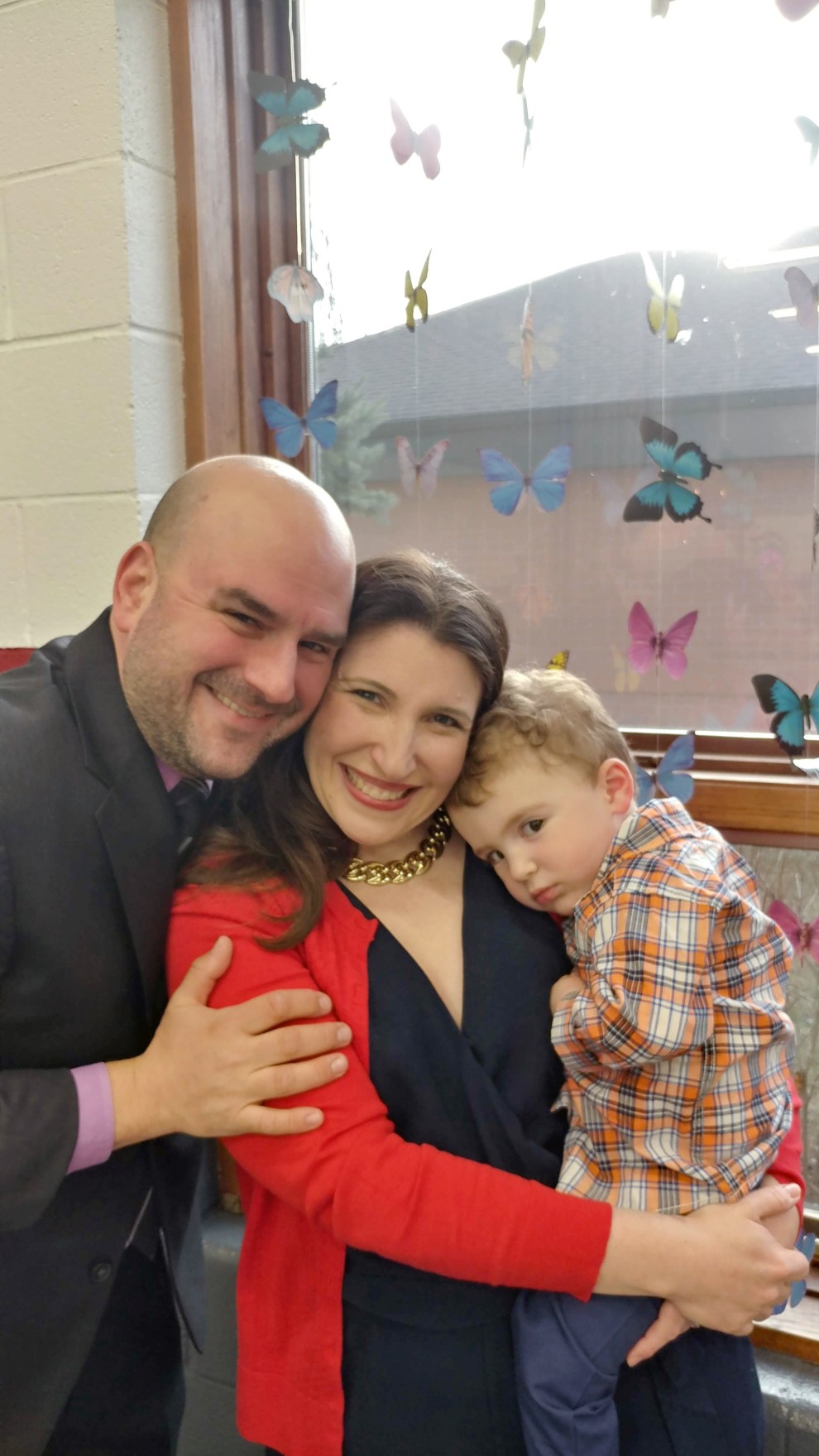 A few years ago, the idea of relocating to Akron began percolating for David and Molly Stock. Molly’s parents and sister (mom to her seven-year old niece) have been living in Stow for just over a decade, while  her other sister lives near Cleveland.

“Moving here was an opportunity for our son and his cousin to grow up together,” Molly says. She and David have a two-year old son, Benjamin.

The potential of proximity to family got them thinking. And through learning about the community from Molly’s family and visits over the years, the Stocks gleaned the sense that Jewish Akron was a strong, welcoming community.

“I had a sense it would be a welcoming community, but I was overwhelmed by how above and beyond it was,” David says. People reached out to them, spent time with them, and helped the family get situated when they moved last July. He adds: “I was impressed by how amazing it was.”

Molly grew up in Green Bay, Wisconsin. She explains that the Jewish community there is similar to Akron – close knit and welcoming. “In many ways it was a very familiar feeling coming here,” she says.

Both Molly and David have always been involved in their respective Jewish communities. Molly says she went to Jewish summer camp, was in BBYO, and always had a strong sense of identity and community. During her 18 years in Chicago, she was involved in the federation there and AIPAC (The American Israel Public Affairs Committee).

David is a Chicago native. He grew up in the Rogers Park area, which has a significant Jewish population. As he puts it, he was raised “in a Reconstructionist home, going to a Conservative [Jewish day] school, with Orthodox friends.”
He says his involvement in BBYO “was the foundation for it all.” He went on to become a BBYO advisor after college and was involved with the Federation and the ADL (Anti-Defamation League) in the different cities he lived in over the years. “I’m excited to see a lot of those same opportunities in Akron,” David notes.

“We want to jump right in and get involved,” Molly says. “We can really shape the future of our community in way that we couldn’t do in a larger city.”

The J-Ticket has already allowed them “to jump right into the community…because we didn’t have to choose,” she says. They could become members at a synagogue, enroll their son in the Mandel ECE, and join the Shaw JCC. The J-Ticket offers all these options (plus more) for one affordable price.

“It’s a one-stop shop,” David explains. “It made the transition a lot easier with one thing not worry about.”
The community concierge program also helped familiarize the Stocks with Jewish Akron. Community Concierge Cathy Baer “was the gateway,” David says. She connected them with others and shared information about the community and how to get involved.

So far, they have attended many events on campus, are active at Beth El, and attend and host PJ Library playgroup meet-ups. Molly joined the JCBA marketing committee and is in the spring session of JLI (Jewish Leadership Initiative).

The Stocks’ son attends the Mandel ECE and “loves it,” Molly says. “It’s such a great program. We can’t say enough about it. He’s clearly thriving.”

“There’s such an infrastructure here you’d think would be present in larger communities,” Molly says. “The programs here have a personal touch.”