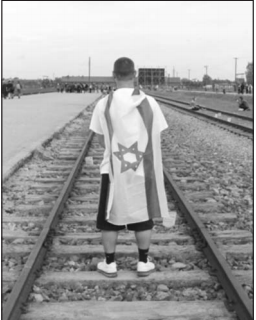 Attending March of the Living was such an incredible opportunity to witness first hand the sites of the Holocaust. When I first heard about this opportunity, I did not know how they could pack all of what we did into two short weeks. Every since I was in middle school I have studied the Holocaust, and in a classroom one can only realize so much. When I was in fifth grade my class started a “Pennies for People” project to show that every person (and penny) has a face and a story.

From then on I’ve seen documentaries, read stories, and seen presentations, but nothing could prepare anyone for the feelings encountered by stepping on the grounds of Auschwitz for the first time. Knowing that is the exact place that over a million Jews were murdered is a very tough realization to have. The next day we marched from Auschwitz to Birkenau, which was called the “Death March” during the time of the war. When we first got to our spot in the line, we were all the way in the back. Seeing all the delegations from all around the world really showed how we are never going to forget what happened, because the one who doesn’t remember history is bound to live through it again. The march itself was quiet with brief conversations consisting of stories that we have heard from the Holocaust education that we had at home. Once we arrived at Birkenau, a speaker read names off and we could see the majority of the 8,000 participants in the march. Walking towards the stage, I was asked to put on tefillin, so, of course, I did. Standing next to the railroad tracks looking at both sides of the camp really put the whole trip into perspective. With an Israeli flag on my back and tefillin on, saying the sh’ma made me feel so proud to be Jewish.

The next camp we went to was Majdanek and what stuck out most was going into the gas chambers and seeing scratch marks on the wall and the stains from Zyklon B really takes all feelings out of you. Walking out with all 50 people from my bus and having a closing ceremony with all three buses gave everyone the closure we needed. Travelling to Israel on our 1 a.m. flight was unlike any other. This was my third time going to Israel, and I think it was the most meaningful because it drove home the idea that the Holocaust made a need for the Jewish state of Israel. Getting off the plane and having a full day ahead was very exciting. We climbed up Masada and went to the Dead Sea that day.

We went to a Yom Hazikaron ceremony, where we honored 23,169 fallen soldiers and they told the stories of five. The whole ceremony was very moving, but what stood out the most was singing the HaTikvah with everyone at the end. No matter what language everyone spoke, we all could sing it together. The next day was Yom Ha’atzmaut and we had our second march with thousands of teens from all around the world. Ending at the Western Wall and having a ceremony there was unbelievable. I really couldn’t believe I was standing there with tefillin on saying the HaTikvah as the ceremony came to an end. It was an experience and a moment that I will never forget.

When my family went on a BBYO family mission to Israel last year our tour guide, Hillel, said I absolutely should go. Once I signed up for the March of the Living, I found out Hillel was our tour guide! I went to Israel with my Lippman class and my family, but Poland would be a new experience.

Our trip to Poland was very somber. There were 10,000 adult and teens on the actual March of the Living. It is beyond my understanding how cruel people were to each other. Seeing a pile of ashes and knowing that it represented tens of thousands of people is something I am still trying to comprehend. However, being with 10,000 Jews from all over the world and singing Hatikvah together on the grounds of Auschwitz was empowering.

We were in Jerusalem for Yom Hazikaron, which is a very somber day unlike our Memorial Day. At eleven o’clock in the morning a siren went off in the whole state of Israel to commemorate fallen soldiers. It was touching to see everyone stand still to remember those who fought for Israel. We were also in Israel for Yom Ha’atzmaut, and it was crazy. There was an incredible amount of Jewish pride. We went to Ben Yehuda Street for Yom Ha’atzmaut, and it was like Times Square on New Year’s Eve but on steroids. I felt very proud and happy to be Jewish.

While we were in Poland, a middle aged German woman came up to the Holocaust survivor, Trudy, who accompanied the BBYO delegation. She asked Trudy for forgiveness for her people’s behavior during the Holocaust. Trudy told her that not all Germans were bad and she had forgiven them, especially when she looks at her children and grandchildren. I learned from Trudy that we should never forget but we need to be thankful for what we do have, which is a beautiful homeland. 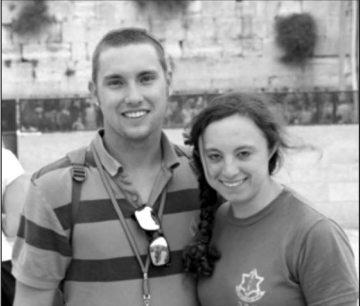