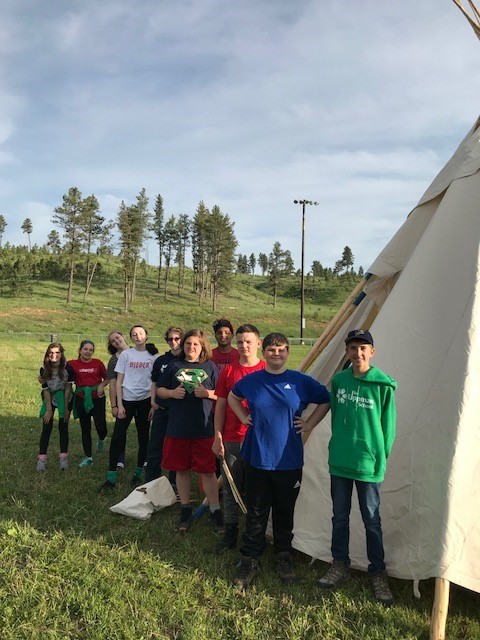 As part of an integral educational experience at The Lippman School, four educators and ten seventh and eighth grade students recently traveled to the Northern Cheyenne Reservation and Yellowstone National Park in Montana for a week-long adventure. The trip stems from a lasting relationship between the Northern Cheyenne tribe and The Lippman School and is part of cultural exchanges that have been happening for the past eight years.

The group had the privilege of beginning their adventure on the reservation by constructing a tipi under the guidance of Burt Medicine Bull, a Northern Cheyenne Tribal elder. They slept in the tipi for the next two nights. Tipis are still used by the Northern Cheyenne for camping, ceremony, and important family moments.

On the second day at the reservation, the group prepared and experienced a sweat lodge at the home of Alaina Buffalo Spirit. Sweat lodges are used by tribal members for healing, ceremony, and socializing. It is also a way for the Northern Cheyenne to maintain their culture, pass down tradition, and pray for people in their community.

“We were immersed in the traditional practices of the Northern Cheyenne; it is an honor to share these moments with them and reflect on their history,” says Matt Russ, teacher and curriculum coordinator at The Lippman School. “These experiences are incredibly unifying and at the same time deeply personal for everyone involved.” Russ was accompanied on the trip by fellow Lippman educators Leora Cohen, Katie Markey, and Sam Chestnut, head of school.

One of the traditional chiefs, Philip Whiteman, took the group to a sacred and prophetic landmark named Deer Medicine Rocks on the third day. The rock tells of the prophecy that Sitting Bull of the Lakota had predicted the defeat of General Custer at the Battle of The Little Big Horn. The rocks also tell the story of the Cheyenne people and their connection to earth, animals, and humanity.

On day four, Lynwood Tall Bull, another Cheyenne elder who is an authority on local/tribal ethnobotany, took the Lippman group on a hike to an ancient buffalo jump and pointed out the many edible plants on the reservation and their nutritional and medicinal properties. He spoke about the importance of the buffalo to his people. The group was also able to enjoy a beading workshop on the fourth day.

“These experiences transport the students to a level of learning that is far beyond what any textbook or classroom setting could offer,” says Sam Chestnut, head of The Lippman School.

Following their visit to the reservation, the group traveled to Yellowstone National Park, where they camped in Mammoth Hot Springs Campground. The group spent time at Old Faithful’s Geyser Basin and stopped at the picturesque Art Point, the grand canyon of Yellowstone.  They also enjoyed horseback riding at a local ranch.
Each fall, The Lippman School, The Northern Cheyenne Nation, The Summit County Historical Society and other local schools walk a portion of The Portage Path, the oldest landmark in Summit County, as a tribute to native people who first settled in Akron. The annual symbolic walk will now be held on the first Monday of October to commemorate North American First People’s Day here in Akron.  This year it will fall on Oct. 1.