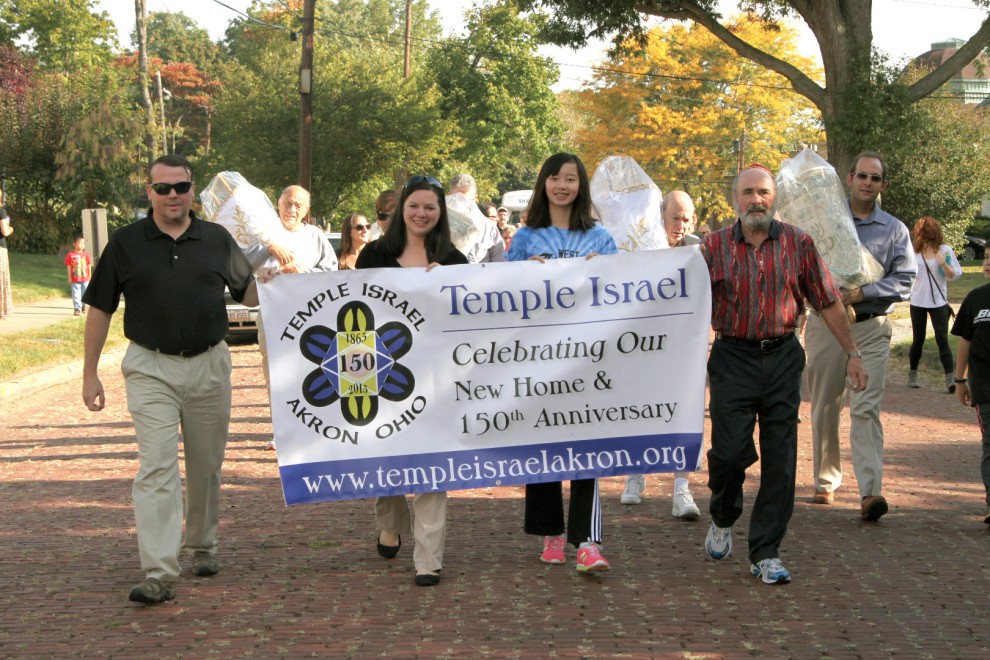 What a fabulous day it was for Temple Israel.  On, Sept. 28, hundreds of people participated in a once-in-a-century event: a Torah Walk beginning at 133 Merriman Rd. to our new spiritual home at 91 Springside Drive.

As chairman for the Torah Walk and dedication event, I was assisted by new board member Bret Belfer.  The task of planning our physical and spiritual journey was something we have never experienced.  We needed to sojourn our Torahs to our new spiritual home; we also needed to dedicate our new Temple when the Torahs arrived.
Rabbi Feinberg gave a farewell talk to about 80 congregants within the Merriman Road sanctuary.  He indicated that our Torah Walk was to be led by our Holocaust Torah to keep alive the religious home and dreams of the town in former Czechoslovakia from which the Torah was situated until World War II, when the town and synagogue were destroyed.  He indicated that this Torah continues to keep their memories and dreams alive and those memories and dreams will continue in our new spiritual home.

Leaving the Merriman Road building, we stopped on the steps for people to take photos.  As I attempted to keep us on time, I never anticipated the amount of cameras and smart phones clicking picture after picture.  Everyone it seemed wanted that one last moment to say goodbye to our century-old home.  I must admit that as a Temple Israel congregant for close to 30 years, it was certainly bittersweet for me.  I know from personal conversations with many of our congregants who have been members of Temple Israel for all of their lives this was not easy for them to move on.

A contingent of close to 100 people walked the Torahs to Highland Square.  In front of the Highland Square public library, Father Gordon Yahner, pastor emeritus of St. Hilary Parish in Fairlawn, blessed our congregation for all its community involvement within the greater Akron community.  Our Torahs were then transported along with congregants on the Shaw JCC bus to Fairlawn.  Our welcome to Bath was extended all the way back to Merriman Rd., as the Bath Police Department assured our safe passage.

In Fairlawn, about 125 additional congregants were waiting at the Earth Fare plaza.  From there, a group of 250 people walked the last mile or so to our new spiritual home.  From my personal vantage point, I was waiting at the new building to greet our “Torah Walkers” and could not believe that all our efforts were finally coming to fruition.  It was an emotional moment for many of our congregants as well as me.

Once inside the building, an overflowing number of congregants and guests were asked to sit in a sanctuary that was at the time not a sanctuary.  The dedication service started with a Torah processional led by our Holocaust Torah and all nine Torahs carried by past presidents were placed in the ark.  Rabbi Feinberg, assisted by Cantor Rosenman, extended blessings for our new sanctuary.  President Ron Winer expressed his thanks and true humility to be part of this significant event in the history of Reform Judaism and Temple Israel in Akron.  Our younger religious school children were part of the dedication and they all learned to blow the Shofar to assist Rabbi Feinberg as part of the service.

Then the congregation went to our front door and Rabbi Feinberg blessed the Mezuzah that has adorned our Merriman Road home since 1952.  Tours of the new building and a light lunch followed.
This momentous day was the culmination of close to ten years of dreaming, planning and hard work. Our long term strategic plan developed in 2005 set us on a course to address our facility and other issues.

We knew that we must address our physical facilities, since our Merriman Road home was approaching a century of use.  The plan asked some key questions.  Should we renovate our existing building, find a green parcel of land and build, or find an existing building that could potentially accommodate our needs? The conclusion of this planning process was to renovate an existing facility closer to where the bulk of our congregation lives and where future development will continue to occur.  Almost four years ago this solution was supported as a number of congregant families purchased and gifted 91 Springside Drive to Temple Israel.

From there we attempted to understand the wishes of our congregation as well as the financial realities of renovating the Bath property.

Well, a huge amount of blood, sweat, tears, and financial resources were ultimately expended and raised.  On September 28, 2014, Temple Israel officially journeyed from our Merriman Road home of almost 104 years to Bath, Ohio.

A key lesson for me is that a congregation is not a building.   A congregation is more than the sum of its people, current and alumni members, and those of blessed memory.  A congregation is the people who pray together, support one another and make life-long friendships to raise their spirituality.  Ultimately, the people become a community who support one another.  May the memories that we collectively share be passed down from generation to generation to continue the successful journey of Temple Israel.

Next, onto our 150th anniversary celebration which begins in January 2015.