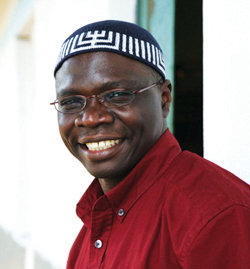 The Akron Jewish community is invited to come together for a series of Community Shabbat Dinners in 2018. The third and final one will be held on August 24 at Beth El Congregation. The evening's speaker is Rabbi Gershom Sizomu. He is the the leader of the Abayudaya Jews of Uganda and the first black rabbi from sub-Saharan Africa to be ordained at an American rabbinic school. As a visionary community leader, he chose to attend a rabbinic seminary to better understand ancient and modern Judaism and bring the Ugandan community into mainstream Judaism. The Abayudaya are a growing community of over 1,500 Jews living among their 10,000 Christian and Muslim neighbors in scattered villages in the rolling, green hills of Eastern Uganda. In 2016 Rabbi Sizomu ran for Ugandan Parliament for the second time and won an opposition seat representing the Bungokho North District. He is the first Rabbi to win a seat in Parliament in Uganda’s history.