At its regular meeting on Monday, April 15, Summit County Council unanimously agreed to extend a celebration of Native American heritage to the entire county. Council adopted a resolution declaring the first Monday in October as “North American First Peoples Day,” a companion resolution to one adopted by Akron City Council in January, 2018.

The resolution honors Indian history, life and culture, and is an initiative led by students from The Lippman School of Akron, which has a longstanding exchange relationship with the Northern Cheyenne Nation of Montana. Burt Medicine Bull, a Northern Cheyenne Language Instructor at Chief Dull Knife College asked Council to support the resolution, and honored their meeting with a traditional song. Two students, along with LaDonna Blue Eye of the Choctaw Nation of Oklahoma made presentations to the Council.

“From what we understand, Akron is the first city in the United States to designate a unique day to recognize native people rather than renaming Columbus Day to Indigenous People’s Day,” said Sam Chestnut, Lippman Head of School. “This is an exciting time for our students, staff and the Northern Cheyenne Nation, and I am proud of what we’ve been able to accomplish together.”

“Learning about the struggles of the Native Americans from a book or a teacher is one thing, but hearing personal stories, meeting survivors and participating in their culture and ways of life makes it all seem more real. We simply want to recognize these facts and shine light on the wonderful culture of our indigenous people.” SONJA ROY, LIPPMAN STUDENT to Summit County Council members

A coalition of history and education organizations has planned a weekend of events to commemorate Summit County’s North American First Peoples Day, October 4-7, 2019. The activities are sponsored by The Portage Path Collaborative, an assembly of Students from Lippman School Convince Summit County to Adopt North American First Peoples Day educators, organizations and individuals committed to preserving and sharing the history of the First People of Summit County. The group includes The Summit County Historical Society, The Lippman School, Summit Metro Parks, and The University of Akron Institute for Human Science and Culture/ Cummings Center for the History of Psychology

The Portage Path – Akron’s oldest landmark and a tribute to the Native people that first occupied the land here - will be celebrated in a series of events beginning Friday, October 4, with the opening of a new Native American art and artifact exhibit at the Cummings Center, Institute for Human Science and Culture at the University of Akron.

On October 6, North American First People’s Day will be recognized with the fourth annual walk of the 8-mile Path, which for the first time will be held on a Sunday. The symbolic walk will allow students to learn more about the native people who used the portage. This was marked by the Summit County Historical Society in 1999, when for the first time, monumental sculptures at each terminus of the Path were connected over the 8-mile trail by fifty markers in the shape of historic Indian broad blades.

For the second year, a Native American Foods Dinner will be held Sunday, October 6 at the outdoor pavilion of the Schultz Campus for Jewish Life on White Pond Drive.

On Monday, October 7, the Collaborative will sponsor in-school activities around Summit County, including a “teach-in” with appearances by Indian nation representatives.

In 2016, students from Lippman, Portage Path CLC and the Cheyenne Nation joined together to create a web-based mobile “app” that provides extensive information about the Indian trail, including its history and the natural world that it traverses. The app can be accessed at www.walkportagepath.org

A new booklet outlining the historic trail and the history of Native peoples who used the Portage Path has been published, and is free and available at the Historical Society and at Metro Parks’ Seiberling Naturerealm. 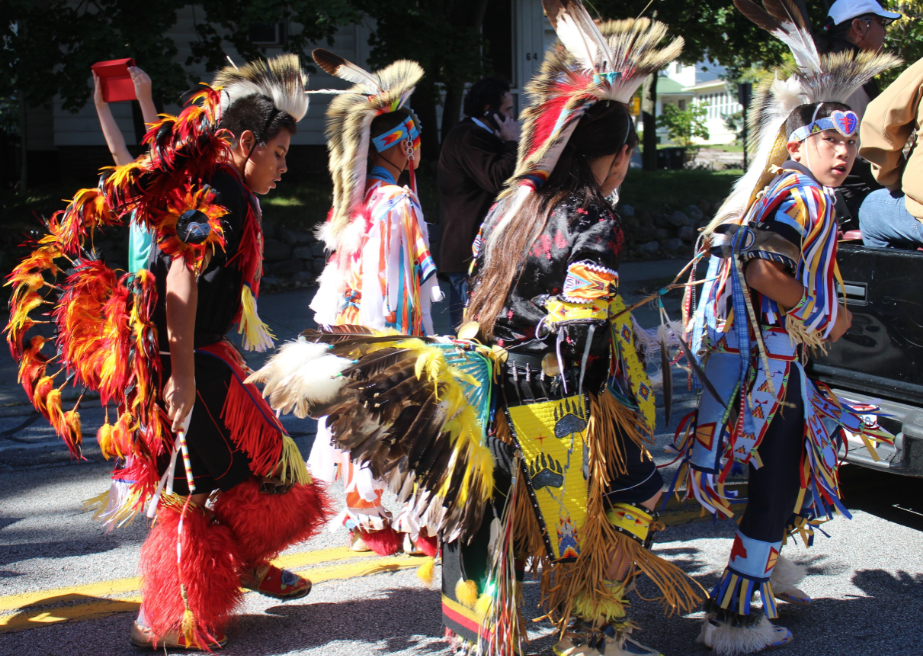 (Photo: Since 2000, Lippman students have traveled to the Northern Cheyenne Nation in Montana every other year, while members of the Northern Cheyenne have visited Akron and the Lippman School each fall. Because of this initiative, the students campaigned for a resolution honoring and educating about the history, culture and contributions of tribal nations and reflecting on past harms against Native Americans to prevent unfair treatment of marginalized groups in the future.)