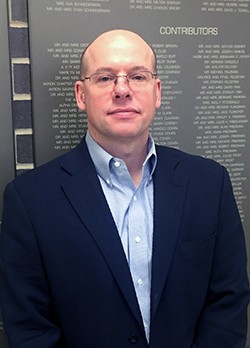 Ten years ago, he joined the JCBA as its chief financial officer, continuing in that position when he assumed the role of interim executive director of the Shaw JCC ten months ago. Prior to his work on the Schultz Campus, Keverkamp was director of finance at Hattie Larlham. He earned an MBA from Kent State and bachelor’s degree from Lake Erie College.

“Since first stepping as our interim executive director, John has demonstrated superb, well-thought leadership and decision-making skills,” says Mark Baer, president of the Shaw JCC board of trustees.

His role as CFO for JCBA was integral to the campus, albeit more behind the scenes. More JCC members have gotten to know and been impressed by him as the interim executive director, realizing “there’s a lot more to John than the guy sitting in the corner crunching numbers,” as Baer puts it.

The people on the Schultz Campus are a key reason Keverkamp enjoys his work here. “It’s such a welcoming community, and I’ve gotten to know so many people,” he says. “I enjoy all the diverse people I work with.”

This comes across in the skill he has shown for helping to build a culture of teamwork on campus. “John has nurtured an extraordinary environment of collaboration among all of the agencies, volunteers, and employees” on the Schultz Campus, notes Baer. “He has the complete trust, respect, and confidence of the Shaw JCC staff. I believe that he will give our leadership and staff members the necessary tools and space for each to flourish.”

Former CEO of the JCBA David Koch shares: “Now also in his role of Vice President of the JCBA, John’s in-depth knowledge of the mission, campus operations, finance and inter-agency collaboration clearly sets him apart…I know that John will work hard to assure that the future of the Schultz Campus for Jewish Life continues to make positive forward strides.”

Even so, “he understands fully where we’re going, what we’re trying to do,” says Baer.