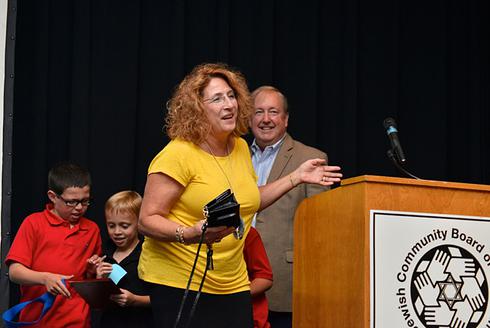 “I would like to acknowledge Kathy Salem, who didn’t blink when I asked her for $100,000, and also agreed to chair the “Splash” campaign to raise the money we need for the project […] We don’t give this one away every year. We really prefer to wait for there to be someone who has excelled in some way, in service to our Shaw JCC.” Thom Mandel also said.

The Stewart Surloff award for excellence in leadership and service to the JCC was originated by Marv Shapiro, and in 2002, was renamed in honor of Stewart, who had been President of this JCC, and who had led a lifetime of service to the center. Some past honorees include Keith Mirman Irv Sugarman, Mike Lapides, and Marc Merklin. Kathy Salem is the first female in this distinguished list of recipients.

Kathy’s interest in the center goes further back than the start year of this award. She donated $250K to the fitness center during the renaissance campaign in 2004 and, together with Bonnie Cohen and Janice Woll she led the beautiful tile project that decorates the JCC Lobby. Kathy also chaired the original Women Auxiliary’s brick project.

Here are the Shaw JCC know Kathy not only as a passionate volunteer and a generous donor but also as a grandmother in our Early Childhood Education program to little Victoria, (Viv) and to her brother Joseph who just recently now moved up to elementary school. After the whole family got back from the annual meeting Joseph declared he would be the guardian of the plaque award and keep it in his room!