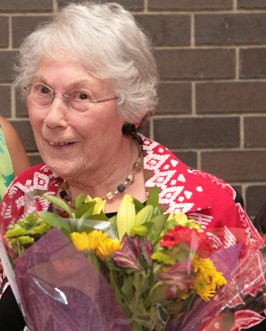 Gloria Reich died on Feb. 11 at the age of 95, leaving a legacy of devotion and leadership to the Akron Jewish community.

Born in Cleveland, Gloria Moss moved to Akron with her family as a teenager. She attended Buchtel High School, where she met the love of her life, Jack Reich, who she married in 1942. While Jack served in the army, she graduated from the University of Akron, where she was a member of Delta Phi Iota sorority. They were married for 56 years, until Jack died in 1999.

While raising a family of five, Gloria worked and also served as a volunteer— filling leadership positions in organizations including Hadassah, the Jewish Community Center (JCC) and Beth El Congregation.
“Gloria dedicated her life to her own family and her Jewish family,” longtime friend Esther Hexter says. “She was driven to do this because she cared so much about our Akron Jewish community and the worldwide Jewish community as well.”

After her children were grown, she returned full time to the working world to a job at the Jewish Federation of Akron. As the Federation’s community and public relations professional, she also staffed Women’s Division always encouraging participation by the women in our community, and was a liaison to Ohio Jewish Communities.
“In her years at Federation she was all of our eyes and ears and encouraging conscience on the world— local, regional, national and international, all through her favorite lens: Community,” Hexter notes.

Among other responsibilities, Gloria hosted the Civic Forum of the Air on WAKR. She edited the Akron Jewish News from 1970 until her retirement in 1985. Her column, Point of View, in which she shared her opinions on world, local and personal events was a favorite, and she contributed guest columns even after retirement.

“Being involved in one’s Jewish community is more than a vocation or an avocation – like being Jewish – it’s a way of life,” Gloria wrote in a column in 1980

Gloria received many awards including the “Minnie J. Ellet Award for Inspiration” from the Women’s History Project in 1999. In 2011, Jewish Family Service of Akron established the Gloria Reich Volunteer of the Year Award in her honor. In addition, she was named a lifetime member of the Shaw JCC Board, one of only three people so recognized. Jewish Community Board of Akron honored her lifetime of dedication to Jewish Akron with a special tribute event to her in 2012.

Gloria will be remembered by her daughters, Suzan Berns (Milton Weiss), Nancy Rashap (Ira) and Laurie Bishop (Gary); her daughter-in-law, Sandi Lederman (Ron); eight grandchildren and six great-grandchildren. Besides her husband, she was preceded in death by her daughter, Karia Gali; son, Paul Reich and grandson Seth Reich.
Donations in her memory can be made to the Jewish Community Board of Akron, Beth El Congregation, or Jewish Family Service.