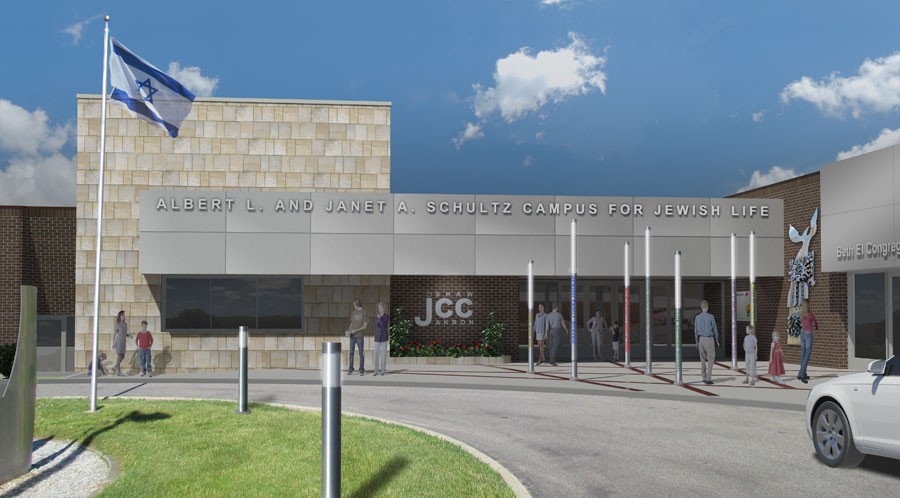 On Sunday, April 26, 2015, the Jewish Community Board of Akron (JCBA) will dedicate 750 White Pond Drive as the Albert L. and Janet A. Schultz Campus for Jewish Life in recognition of a $10M gift to the JCBA made by the Albert and Janet Schultz Supporting Foundation of the San Francisco Jewish Community Federation.

At 11:30 am Sunday, April 26, 2015, 750 White Pond Drive in Akron will be dedicated as the Albert L. and Janet A. Schultz Campus for Jewish Life.  Weather permitting, the ribbon cutting ceremony will take place outside the new Campus façade. The ceremony will be followed by a champagne reception.

The Dedication is underwritten in part by the JCBA’s Beverly Magilavy Rose and Arlene Cohen Rossen Fund for Perpetuation of Jewish Life in Akron. The Dedication will be followed at 1 pm with a Campus celebration of Israel’s 67th Independence Day.

About the Campus at 750 White Pond Drive

The Albert L. and Janet A. Schultz Campus for Jewish Life is home to the Jewish Community Board of Akron (JCBA), the Shaw Jewish Community Center of Akron, The Lippman School, Jewish Family Service, the Albert and Janet Schultz Center Towers, and Beth El Congregation. The 40-acre Campus has belonged the Akron Jewish community since 1973.

Each day, hundreds come to the Schultz Campus to enhance their health, emotional, and spiritual wellbeing, as well as to enjoy excellent educational opportunities and to celebrate Judaism in a context of diversity.  A wide range of programs, services, and events are offered free of charge on Campus, including speaker nights, Israeli culture nights, movie screenings, social gatherings, and art exhibitions.

About Albert L. and Janet A. Schultz

Albert Schultz was the controller of Olson Electronics. He and his wife Janet (Abramson) met at the opening of the Akron Jewish Center on Balch Street in 1929. They married in 1935 and raised their two daughters in Akron, before moving to San Francisco in 1979. In 2012, Mr. Schultz decided to establish his family legacy in Akron with a $10 million gift to the JCBA. His wishes were carried out after his death in 2013 by his family and family foundation.

“The Akron Jewish community meant ‘beginnings’ to my aunt and uncle,” explained Deana Kalman Freedman, Mr. and Mrs. Schultz’s niece from Orinda, California. “Akron was where they were born, where they met and fell in love, where they raised their family-- and the Akron Jewish Center and Beth El Congregation were the centerpieces of their lives. Obviously they wanted to make sure these roots continue thriving.”

The Impact of the $10M Gift

Part of the gift has been designated for immediate capital improvements on the Schultz Campus. The vast remainder has been endowed to preserve the Campus, and to support programs in the Akron Jewish community in perpetuity.

“We are thrilled that Mr. Schultz wanted to create a legacy for himself and his wife in Akron here on our Campus,” said David Koch, CEO of the JCBA.  “This $10 million gift is a real game-changer for the Akron Jewish community.”

For more information, please contact Greta Foster, Director of Endowment at the Jewish Community Board of Akron (330) 835-0004 or greta_foster@jewishakron.org